DesignItMakeITLoveIt: How to make a camper van from a chair

Apart from the fact that I made them all, how are a Windsor chair, a garden Pergola and a Camper Van connected?

Back at the start of 2016, I had an urge to learn a few new techniques and I recognised that making a Windsor chair required several methods and ways of thinking that I had not done before.  The most obvious and important for me was steam-bending, but there was also the use of green timber (i.e. recently felled and unseasoned ) as well as a requirement for wood-turning.

To be strictly accurate, I had tried some steam-bending when I was about 15, trying to make myself a squash racquet.  Needless to say I lost the one game I ever played with it.

I wanted to enrol on a chair-making course , but I was painfully aware that the majority of such courses were far more rustic than I could cope with.  My feeling has always been that if you allow a “that’ll do” attitude into less important pieces it may creep back in when you are struggling to perform on an intended masterpiece.

For that reason I chose to make the chair under the tuition of James Mursell of www.thewindsorworkshop.co.uk  fame.  His book, “Windsor Chairmaking” makes it clear that he takes the same care and attention to detail that is present in all the best cabinet makers, but in few of those who would call themselves a “chair bodger” –  the traditional term for Windsor chair makers. 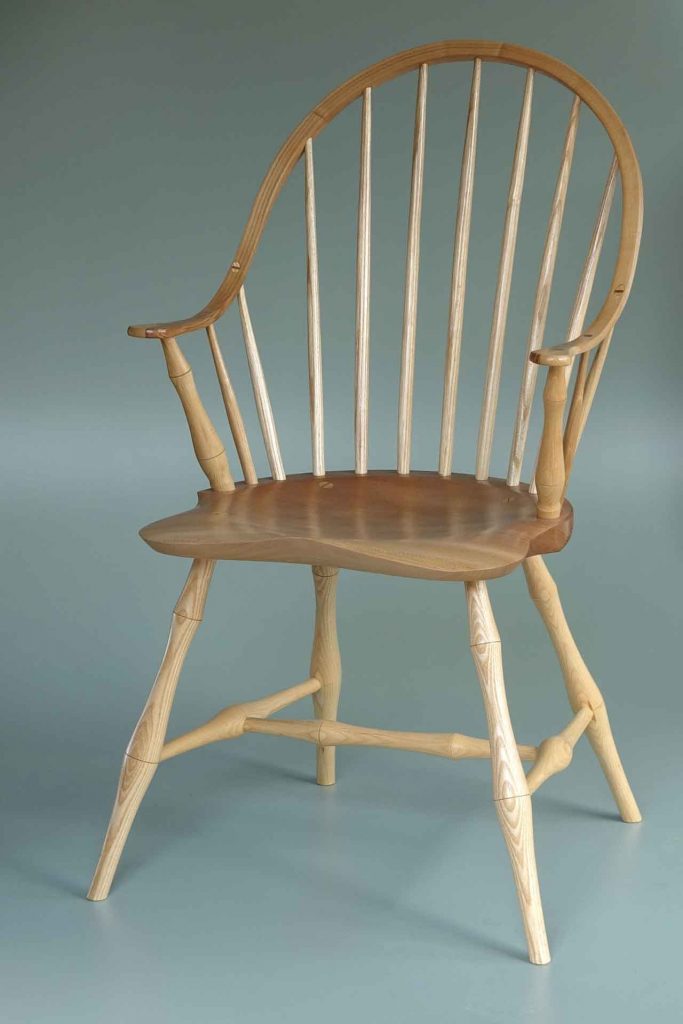 Windsor Chair in Ash and Lacewood

Of all the techniques in the woodworker’s arsenal, steam-bending is the one that most seems like  something Harry Potter would be at home with. You take a piece of stiff wood, heat it in steam to 100 degrees C and for the short time before it cools down again it can be manipulated into the curve of your dreams – or it  might disintegrate into firewood.

You may be wondering what is the connection between a Windsor chair and a Camper van? Well, the camper van was to be my next project, and in order to build it, I needed a garden pergola, or so I thought.

Because I did not have access to a van-friendly workshop I thought that if I hung a tarpaulin from a pergola built across our driveway I could work on the van while sheltered from the rain.   Fortunately I never needed to test the tarpaulin idea as the weather stayed dry for most of the 3 months it took to build the van.

While we came up with a lot of good ideas while designing and building the van,  it is possible that turning the pergola into a huge parachute wouldn’t have been the best of them but the pergola will look fantastic when the roses are done climbing.

The steam-bent curves of the pergola are of much larger radii than for the chair, but they are also up to 4m long which made it difficult to build the standard steam-box and then bend them around a former. The method I came up with was a sort of “boil-in-the-bag” arrangement of bending the wood around  a series of  posts while simultaneously  steaming it.

Like the chair, the pergola was mostly made of green wood (ash for the chair, oak for the pergola).Unfortunately that is totally unsuitable for fine furniture since it will always change dimension as it dries out.  I say unfortunately, because green wood is so much easier to work using hand-tools than dried timber.  You could almost feel it getting more difficult to plane as it dried out in the Sun.

You may have spotted the similarity between the back of the Windsor chair and the corner supports on the pergola?  This is because the latter are one half of the former.  I may not ever make another Windsor chair, but I will definitely be looking to take commissions for more pergolas, as they are great fun to make and it is such an original design. 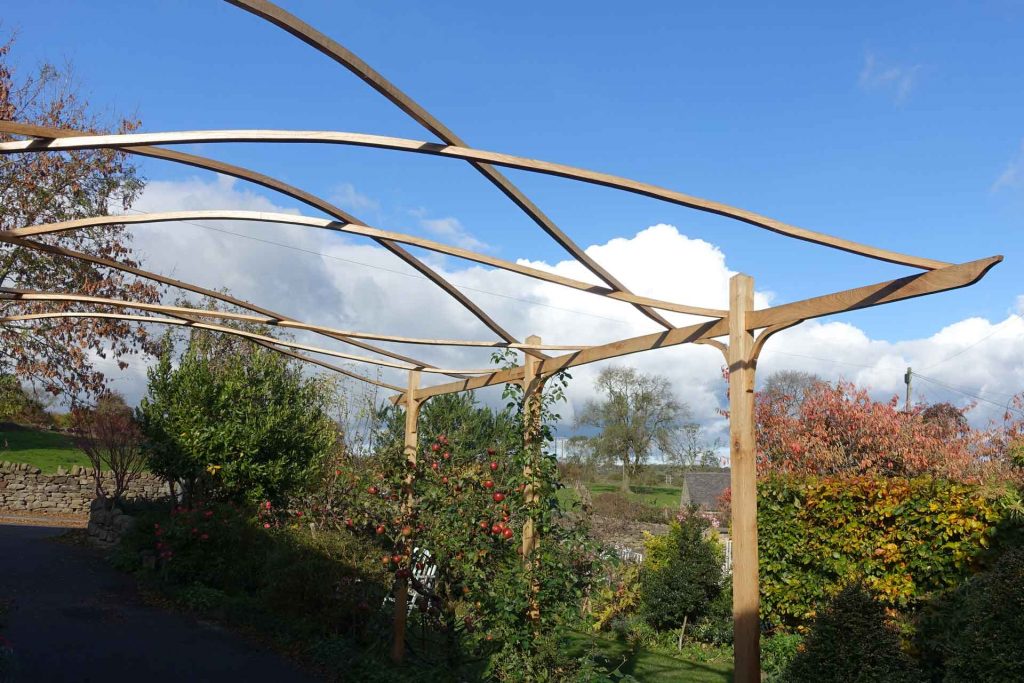 Prior to being steam-bent, the cross-pieces were sawn along the grain of the timber rather than in a straight line.  This significantly reduced failures when steaming and produced a much stronger result because it gets a lot closer to the ideal of having all your wood fibres running along the whole length of the timber.  Building a diagonal lattice also contributed significantly to the strength, as well as being far more attractive than the  more common monster-pergolas you see made from 6”x2” floor-joists.  Once the rose has grown, it should be complimented by the pergola, not obscured by it.

Going into detail about the design and building of the camper van is beyond the scope of this article, but I’ll be happy to answer questions based on what I learnt in the process. I did think I might build further camper vans, but without a secure workshop to put them in, I won’t be in a rush to do another.  Having to fit one window at a time and lock all my tools away every time I needed the loo, or wanted a cup of tea, doubled the time taken and the stress levels attained.

While I loved the challenge of solving all the technical and design issues that arise when building a camper just as much as they do when creating new furniture, it did lack the satisfaction of being artistically creative that designing furniture always achieves.  Designing a camper van is all about how to best organise an entire household’s-worth of pots, pans, clothes and climbing-gear into a slightly enlarged car.  Though I say so myself,  I do think we came up with a better design than any others I have seen on the Nissan NV200. Better for our needs anyway.

Another link between the chair, pergola and camper van is that more than any other pieces I have made, they all stem in some way from my love of the outdoors.  For the camper van the reason is obvious, but for the other pieces I wanted to learn some woodworking  techniques that could be done out of doors in the Summer.  It is very difficult to produce a finely-crafted dining table by working mainly in the garden, but for steam-bending it is the only way.

Some other techniques I started thinking about while making the pergola have found their way into my kitchen trolley, but that is for another article…. 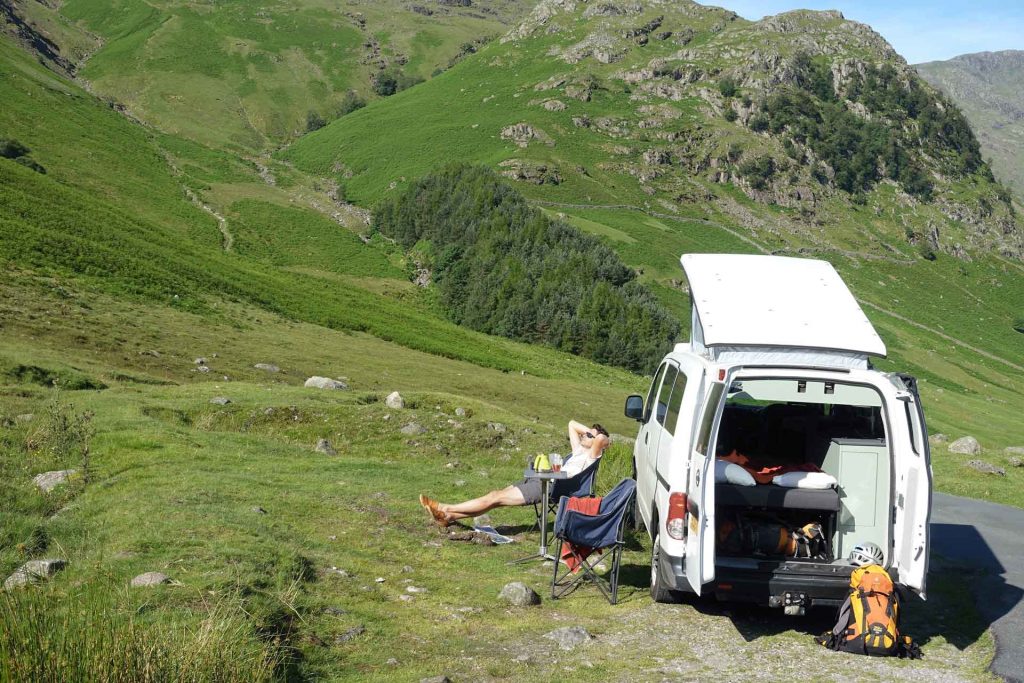 The Eagle-eyed may have noticed a similarity in material between the furniture in the van and my router table.